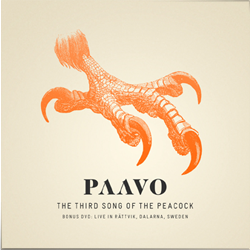 Paavo
The Third Song Of The Peacock
# FYR024

The first time I listened to Paavo I was floored. The carefully arranged compositions were so full of beautiful harmonies and spontanity that I felt like a little kid in the candy store. The origins of the songs seemed to come from a variety of places - a small piece of Swedish folk music was followed by infernal post rock and the moment after slipping over into gentle improvisation. Sofia Jernberg with her sensitive but still powerful voice experiment creates a unifying link. The piano music played by Cecilia Persson is breathing impressionistic art music and creates a detailed and inspiring foundation for Paavo. - Fredrik Caresten, film maker and producer of "PAAVO" - Live in RÃ¤ttvik, Dalarna, Sweden DVD

Paavo has earlier released two praised records, the latest CancÃ³ del PaÃ³ (2010), in a bigger formation with nine musicians in the ensemble. However, the music history of Paavo has been carried mainly by two persons - Cecilia Persson and Sofia Jernberg. On this third record the music is challenged as the formation has been changed from a smaller big band to a trio (in addition to the band leaders you can hear Fredrik Ljungkvist on saxophone). The result is of course different but still brilliant. It also emphasizes that the music by Sofia and Cecilia is in focus, no matter the arrangement, and it is a proof of something very genuine.

Found You Recordings is very pleased to be able to release this newly recorded trio record in an exclusive box also containing an excellently filmed live concert with full size Paavo. A release containing everything, from the small to the big, literally, picturally as well as musically.

No reviews yet. Album is yet to be released.