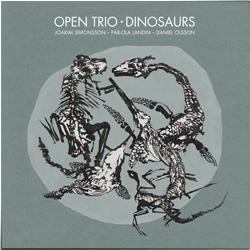 Open Trio has played modern jazz signed Joakim Simonsson since 2000. The trio has previously released two CDs, (Colors, 2003 and Goodbye Everytime, 2008) and toured in Sweden, Germany, Poland, England and Scotland. In reviews, words like lyrical, melodic, and groovy often recurred, and the music has often been described as bearer of the so-called "Nordic melancholy."

After a few years of silence, it is finally time for Open Trio's third album, Dinosaurs, this time both on vinyl and CD. The album contains eight new original compositions by Simonsson, ranging from the thoughtful and melancholy into something much more playful. The interplay is fantastic and this record shows that this trio has its own place. Sure, you can certainly find parallels and trace influences, but Open Trio has its own tone, its own approach to the music. Joakim Simonsson leads this trio and creates through his strong compositions and melodies the foundation which the trio stands. Having said that - Open Trio is a group that improvises and creates music collectively. The songs are explored, taken apart and screwed together. Found You Recordings is very proud to finally present yet another recording by Open Trio.