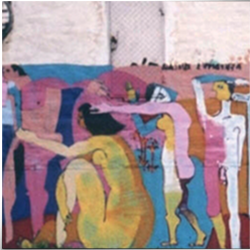 This records was partly funded by:

Carla Bley and I remember with great intensity a night in San Francisco, in 1968, when we witnessed the loudest music weâd ever heard. It happened at a venue called The Filmore, and the band responsible for the colossal noise was Cream âEric Clapton, Jack Bruce and Ginger Baker. They played very well, and this wasnât lost on us, but what we recall most vividly is the shocking shift in scale music at such volume generated, and the recalibration of our senses that shift provoked.

We were reminded of that night when we first heard STHLM Svaga. Itâs a mystery that improvisers have ignored the opposite extreme - to play as softly as possible - but here you have it, and it is no less shocking. The psychological effect of STHLM Svagaâs music is a delight: first thereâs disorientation, but then thereâs reorientation, as you hear that there is, paradoxically, great power in reticence.This is something martial arts masters have long known, and musicians of various sorts, from Morton Feldman to Joao Gilberto, have known about it too, but STHLM Svaga brings this powerful force to jazz, where it hasnât been before. A corner is turned within the music - the softer the band plays, the more force it generates. As near-silence exerts its powerful effect on the musicians they play less, and what they play assumes startling prominence. A well-placed note speaks volumes.

This music requires intense focus. Youâll need to lean into it, to pay heightened attention. But it simultaneously gives as it makes its demands, offering a trip into a world you havenât known before, a world of small things made large by a simple but profound shift in perception.
- Steve Swallow